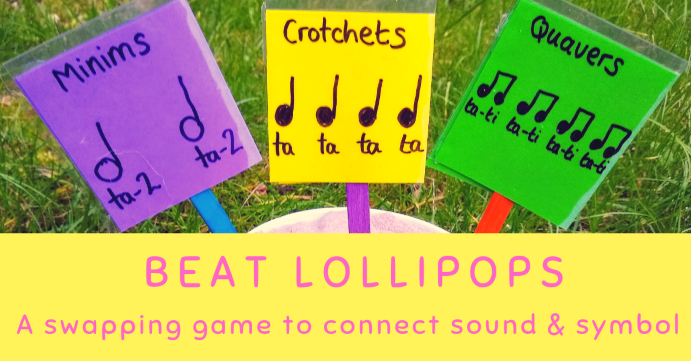 Here is a bright and simple way I help beginner musicians embed pulse and beat in their first year of learning.

My piano pupils do lots of aural activities during lessons. They learn through a ‘sound before symbol’ approach.

One way my pupils internalise beat and pulse is with a quick challenge where we swap between tapping 2 or 3 divisions of beats.

For example I’ll tap crotchets and the pupil taps quavers.  When I call ‘swap’ we swap over.  This helps them to sense the relationship between the two and leads to rhythmic and incisive playing.

When it’s time to connect this to the written symbols, it’s great to pair aural activities with bright visual props.

So I made these!

Bright and colourful and just made for little hands to pick up, these beat lollipops took minutes to make.

They help pupils reinforce the connection between the sound and the symbol.

How to play:
We tap 4 beats, before I call out ‘swap.’ They can see what they’re tapping as each lollipop shows 4 beats as well as the name for each beat type.

They have exactly four beats in which to swap lollipops (I call out ‘swap-2-3-4’) before starting again with their new beat division.

Having this ‘silent’ bar’ provides a great way to experience keeping the pulse going in their heads.

Materials:
Coloured paper (I had some laminated off-cuts left over)
Lollipop sticks or anything else to use as a stick e.g. a pencil.
Marker pen

How to make:
This one couldn’t be easier!

More Information about our online lessons